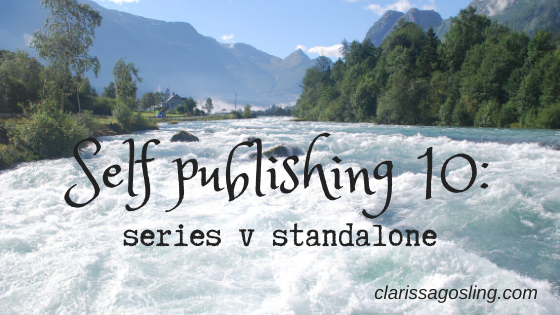 For the next instalment of my series on self-publishing I’m going to look at the pros and cons of publishing a book as part of a series, or as a standalone title. A series is where there are multiple books that follow the same story, and the main story arc is only complete at the end of the series. A standalone book is one that is complete in itself.

A series can be two books long (called a duet), or as many books as you like. Bella Forrest’s A shade of vampire series is 85 books at the time of writing. Though with longer series it is often the case that there are multiple story arcs, so before one is finished something happens to trigger the next one. And then the series heads off in that direction, sometimes following different main characters. Think of it like interlocking links on a chain, where one story arc closes and the next one starts.

The benefits of a series are that, as a writer, you get the readers invested in the characters and they want to know what happens next. It also gives you range to build your world and your characters. And it is easier to market as you have more books to sell, so your margins are bigger. Then if it does well you can always write a related series to continue a different story in that world.

On the other hand you need to make sure that each book feels complete, and that if there is a cliffhanger at the end (where the characters are left in danger) that you clearly let your readers know before they purchase. Otherwise you will get unhappy readers, and that means bad reviews, especially if the next book is not available to them. The point where you split the story into volumes needs to be logical within the story, and you need to have a hook into the next book. So you need to balance the story strands which are concluded and those that are left open for the next volume.

Also, you need to have a plan for the series when you start, so that you can sow things in that can then get picked up in later books. I think of the story in terms of different circles – there’s one for the main story arc, which covers the series (or section of the series if they follow multiple arcs as described above); one for each volume; and one for each scene. They all need to build together to work best. So, knowing where your story is headed means that you can make the first book coherent with the whole series.

If you are writing a series one thing to consider is that over the course of writing your series of books you are (hopefully) going to improve as a writer. And your first book will remain the entry point into your series, when it isn’t necessarily going to be the best example of your writing.

A sub-set of series are serials. These are shorter instalments of a longer story, think episodes of a TV series rather than a film. Each bit of a serial has a section of the story, but they are all shorter and often published quickly after each other. These can then be packaged up into a boxset for print publication, so that the book produced is a sensible size.

As these are shorter you can write them and get them out quicker. The individual stories are often simpler and so easier to edit as well as to write. But you will need a cover for each episode, so the costs can add up, and as they are shorter works the price you can sell them for needs to be lower.

A standalone book is a single title with a beginning, middle and end that requires no other books to have been read to enjoy it, and has no other book following it. It stands alone, as the name says.

The benefits of a standalone title are that it is easier to write and tie up, as it is one discrete thing. And if in the future you want to write a continuation you can, like Margaret Atwood recently did with Handmaid’s Tale.

The downside is that it is more difficult to hook readers into reading more of your books, as they will be about something different. Also, when advertising a standalone title the margins are smaller. If you have one book then you can’t afford to spend as much on promotion, as there is only one book for the reader to purchase. While if you have two or more books in your series you can spend more, as you will hope that readers will then enjoy the book and purchase the rest of the series.

As a beginning author a standalone title is less daunting, as you only need to write one book, rather than starting with a plan to write many and the sheer number of words that would be. On the other hand, if you want to make a serious attempt at self-publishing and finding an audience to read your books it is much easier to do so with a series where you hook the reader into continuing to follow your characters.

This decision is a very individual one, as with ebooks there is no defined length for a book, as there used to be in the past with paperbacks. You can publish a story of 2,000 words or one of 200,000 and, if you can find an audience for it, you can be successful. A story of 100,000 words can be split in different ways – published as one volume, as two 50,000 novels, as five 20,000 novellas, or anything in-between.

Which works best is down to you and your story. Where are the points that are logical to split it? How many covers do you want to purchase? How fast do you write? Which appeals more to you? What do your readers prefer? What price do you think you can sell them for? Balance all these different tensions and you can work out the best way to package your story. And with different series you can try different things.

What I am planing to do is to start with a trilogy of shortish novels. That way I have a series that I can market, and bring readers into, while still being a discrete length. Also, by starting with a trilogy, and then switching to a different series, I can then have multiple entry points into my writing, which will, I hope, continue to improve. So I won’t be left needing to promote the first novel I’ve published in order to bring new readers in, when that won’t be the best example of my work.

I do have ideas for spin off series for related stories set in the same world, but I’ll see how the main series develops before I plan to write those!