Fae Secrets launches on Wednesday. This is the second book in my series about fae. It tells the story of Zoe, a girl who is trying to balance her life, with her horse, in the human realm, with the knowledge she’s a fae princess. Read on for the first chapter!

Though, beware – contains SPOILERS for book one. Read on at your own risk! 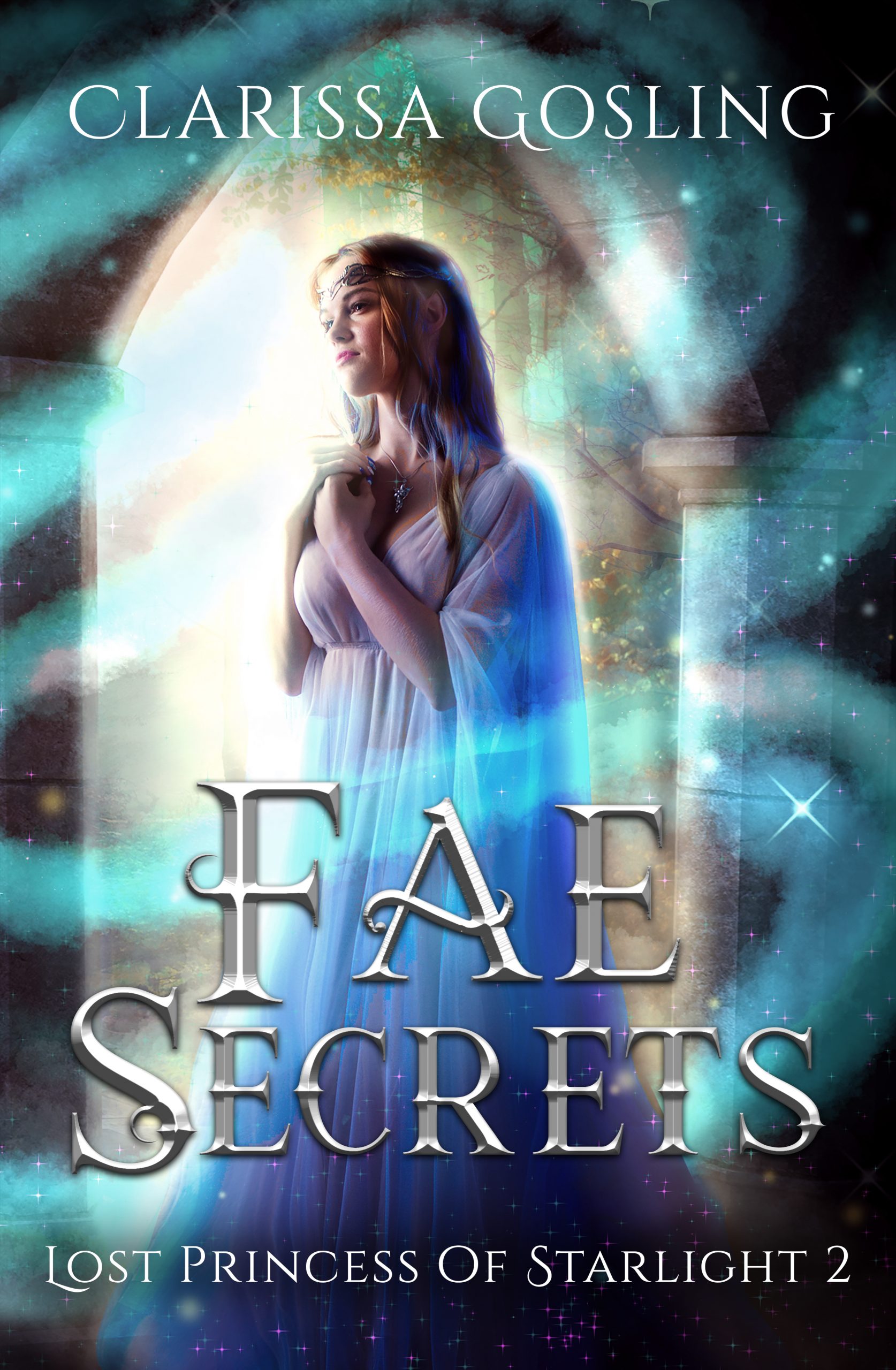 Was it better to break a bargain with a ruthless fae queen, or refuse your determined English teacher? Zoe wasn’t certain. The Queen of Dawnlight wasn’t there. Perhaps she’d never find out.

Zoe’s English teacher, however, stood at the front of the stifling classroom.

“I want to give you the best possible opportunity to thrive in your exams. So, please pair up and choose a scene from A Midsummer Night’s Dream. Then, take it in turns to perform your parts in front of the class, explaining the symbolism and hidden meanings behind Shakespeare’s story. We are almost at the end of our time together, so let’s make the most of this to really embed the story into your subconscious.”

Of course, he would want them to perform it. Zoe’s stomach cramped. She wasn’t worried about getting up in front of her peers, but breaking the terms of her bargain with the Dawnlight Queen. Only two weeks before she’d freed Evan with a performance of A Midsummer Night’s Dream, on the condition that she wouldn’t perform that story elsewhere. Zoe had no intention of breaking her vow, but she wasn’t sure how she could get out of this lesson. Did reciting a scene count as performing it?

With only an hour before lunch, Zoe longed to escape early. She’d found a lunch spot at the back of the school grounds where she could sit alone among some trees. It was the perfect place to practise her glamour while she ate her sandwiches. She wanted to be out there in the shade of the May sun, rather than in the hot, sticky classroom.

Desks and chairs scraped across the floors as the rest of the class quickly formed pairs. This was the sort of class most of them preferred. A din rose. This wasn’t the drama classroom, but theatre was Mr Cooper’s true passion. He included dramatic voices and acting into the literature they studied as often as possible.

Mr Cooper wove through the desks, checking in with each pairing. Scruffy and slouched, he encouraged all his students to express themselves. He was determined to eke out every nuance from Shakespeare’s play before their classes ended and they went on study leave for their GCSE exams.

Zoe sat to one side of the classroom, next to the windows, a few rows from the back. In the middle area that most teachers ignored, which was just how she liked it. But today Mr Cooper wasn’t like most teachers.

“Who are you pairing with, Zoe?” He looked down at her, his thin greying hair stuck down on either side of his head.

She tried to look pathetic. “I don’t really feel well today. Can I sit this one out?” Beneath her desk, she crossed her fingers.

He sighed. “What’s the problem?”

Despite her comfort with performing, she was unable to lie. Every other girl in the class could claim it was their time of the month and be excused, but not her.

“Do you need to visit the school nurse?”

She stared at her hands and shook her head.

He crouched down to catch her gaze. “Then what’s the problem?”

She sighed. “I… I can’t explain it.” She entreated him. “But I can’t do this. Please, just set me a written assignment and I’ll do extra. But I can’t recite this play, not today.”

He frowned. “That’s not like you, Zoe. Normally you’re the first to volunteer to act parts out. What’s happened? You can tell me.”

Normally she would, but explaining she’d made a bargain with a faery queen wasn’t something he’d likely accept. Even if she told him she was risking servitude for her and a friend. Instead, she stared out the window.

Outside, the other wing of the school stood in the sun. The large windows full of children sitting in lines paying attention to their teachers. She frowned at the line of herons along the ridge of the roof. It was uncommon to see one, let alone seven of them at once. But with their snake-like necks, they were undeniably herons. And all their heads looked in her direction.

Mr Cooper stood, his eyes glazed. “Look, I don’t know what you’re playing at. Come on.” He gestured to the front. “Let’s hear you as Puck. You’ve memorised the final speech, so let’s hear it.”

He clapped, and the rest of the class quieted.

“Zoe is going to recite Puck’s final speech for us. Then the rest of you can tell me the key points about it.” He turned to Zoe. “At the front, please. No more messing about.”

With everyone’s eyes on her, Zoe trudged towards the front of the class. She’d find out soon enough if this was enough to break the bargain. She just hoped it wouldn’t hurt too much.

And so she recited Shakespeare’s words, trying to pronounce them as flatly as she could. She wanted as much room to argue this wasn’t a performance as possible.

Mr Cooper held up his hand.

“No, no, no. You can do better than that. Put some feeling into it. You’re a mischievous fae, right-hand man of the Fairy King Oberon, regaling the audience with your cleverness. Start again.”

He didn’t know how close to the truth he was. Zoe’s hand drifted towards the point of her ear, proving the truth of some of his words. Hidden by glamour, they weren’t visible, but she knew her fae ears were there. With a deep breath, she started again.

This time she spoke the words with a small part of what she felt as a fae. The connection she still sensed to the gate in Sprite’s Wood behind her house. And the frustration with all the people round her.

As she reached the middle stanza, her stomach spasmed. She clutched her stomach. Cramps spread till they reached her throat and her calves.

Zoe bent over in half, unable to continue. Her ears rang and her legs shook. Warm sunlight shimmered across the floor. She followed the grains in the laminate, trying to breathe through the pain.

The rest of the class laughed. Girls twirled their hair and one popped bubble gum. Two boys kicked their feet up on their desks, enjoying the show. No one stepped forward to help her.

She willed the floor to open up and swallow her. Even the claustrophobia of being encased in earth would be better than this humiliation and pain.

Her teacher approached. “Zoe, what’s the matter? Are you okay?”

He sighed. “I know I asked you to make it more dramatic, but this wasn’t what I had in mind. Finish the last few lines.”

Sweat beaded on her forehead. Zoe wanted to stop and sit back down until the cramps stopped. She hugged herself tighter, wishing she could become invisible, like the pixies. Then she wouldn’t have to deal with her classmates anymore, but Archie hadn’t explained how to vanish. She wasn’t sure if fae even could. Glamour had limits, after all.

She struggled back upright to face to teacher. “I can’t do this.”

“It hurts. My stomach.” Pain pulsated through her, and she spoke through gritted teeth.

“Finish the speech, and you may go to the nurse.”

Zoe sighed. There was no way out. She rushed the next few lines of Puck’s speech. As she got to the end, her legs gave way, and she collapsed.

Gasps and whispers surrounded her as grey dulled her vision.

Fae Secrets will publish on April 27th on all retailers. Make sure you get your copy now!