Once you have a plan to release a book, or a book series, you then need to think about the timing of those releases. Both in terms of when during the year you publish it, and also how quickly after each other you can publish the other books in your series. 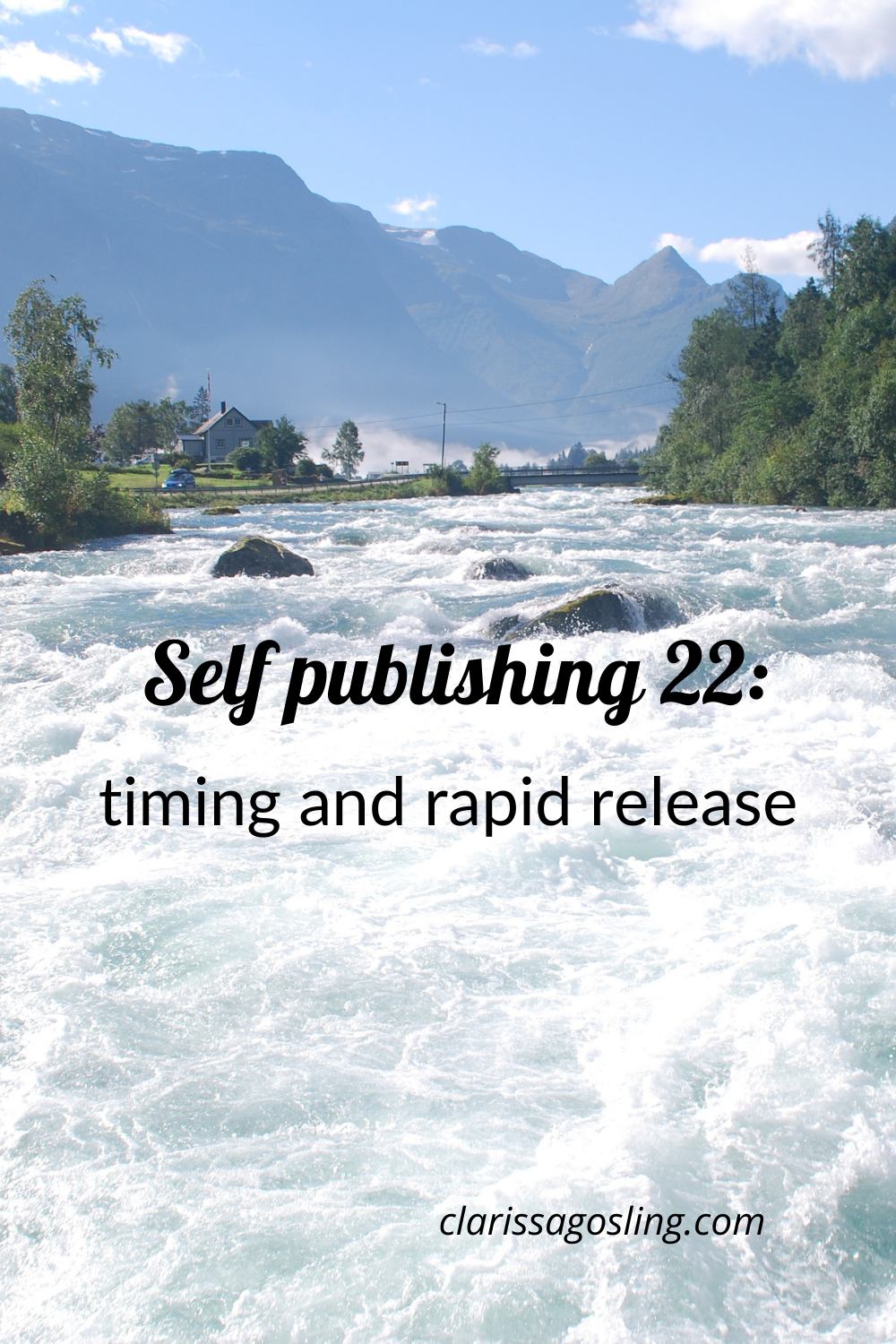 I discussed before the advantages and disadvantages of setting up a preorder. Part of setting that up is choosing which date to set it up on. Obviously there are some books where it is obvious when in the year you should publish them. Holiday romances do better in the winter over the Christmas season. Self help are a good bet in January when many people are interested in keeping their New year’s resolutions. But for most titles there isn’t such a clear cut best time. Books sell all through the year, and books can do well all through the year.

You also need to take into account what else is going on in the world on the dates you are interested in. If you have a mainly US audience then you might not do so well publishing in April, as most US citizens are completing their tax return. The week of a US election is generally considered a bad time to publish a new book, as no one is interested. Many traditional publishers release their top titles towards the end of the year to take account of the Christmas trade, so there can be more competition then.

But, there are no really bad months to publish, and you can continue to run promos on a book once it is published. So even if your launch doesn’t go as well you had liked, you can work to boost sales at a later date.

What is rapid release

Which then brings us to the question of how frequently you should publish, and how long you should leave between releasing books in a series. While part of this depends on how quickly you write and produce them, there are other things to consider.

There are some authors who don’t publish their books as soon as they are ready, instead they hold them until the series is finished (or at least the first few books are, depending on how long the series is) and then publish them quickly with only a few months or weeks between them. This is known as rapid release. The exact length of time between book releases to count as rapid release varies, but the widest definition I’ve seen is three months. Though some people publish multiple books much quicker than this.

Rapid release is a technique designed to maximise profit from Kindle Unlimited and page reads through maximising the visibility of new books on Amazon and playing their algorithms. For other platforms there is not so much churn in the visibility of a book based on their sales rank, and so rapid releasing doesn’t give much advantage.

The benefit of rapid release is that you push a number of books in short succession and as your readers don’t have to wait so long between books you hope to increase read through and keep multiple books higher in the category rankings on Amazon and so in the eye of potential buyers.

The downside is that you are keeping multiple books without releasing them, so you don’t start to earn anything until you have three or more books finished. You also have to pay for covers and editing of multiple books before you start getting anything back from them. For some people this is not possible.

Another disadvantage is that you train your readers to expect books quickly. Even if you have the first few books of your series finished, are you able to keep that pace for whatever you publish after? While rapid release is a good way to make a splash, and to start off with a number of books in a short space of time it is also a good road to author burnout and/or losing readers in between series.

When does rapid release work?

Which is best for you, does depend on what you are writing and how fast you can produce them. If your books are shorter, especially serials, then rapid releasing could be a good choice for you. You would probably want to have a number completed before you start, and use those as a buffer while you work on the later books.

While if you are publishing long novels, then it might not work so well as it will likely take you considerably longer to produce each title. And once you have published the titles you have saved to rapid release, you will likely then need a gap to finish off the next books, especially if you want to rapid release those together too. Which leads to a irregular publishing pattern of a few books quickly together and then a long wait to another clump of books.

It is possible to do a hybrid model, where the first two or three books are pushed out quickly to get the series started, then the later ones are released on a more standard schedule. Now that Amazon allows preorders of up to a year (rather than the few months it used to be) it allows you more flexibility to release one title and still have the preorder available for the next book to push your readers towards.

Again, there are no right answers here. You need to decide what best serves your goals. Do you think it would be easier to promote a whole series, and are you able to cover and edit your books professionally before you earn any income? Then, maybe rapid release is a good choice. Especially if you are also enrolling your book into Kindle Unlimited and so the increased visibility for new books on Amazon is important to you for getting more page reads.

Would you feel less pressure by releasing your books as you go, and use each one to build your audience so you get feedback as you publish each one? Do you want to share your work as soon as it is ready, and not wait for the later books to be ready? Then, don’t worry so much about stockpiling them to release together, and do each one as it is finished. Especially if you are publishing wide, and so the ranking of your book on Amazon is less important to you anyway.

Generally with most self published authors I think the income comes from the backlist, not the newest titles. So as you build your catalogue of published works, you will build your income. And it won’t matter in a year or ten’s time how quickly or not you published them individually.

As with other things, what you choose to do for one series of books is not what you have to continue doing. Experiment and see what works. Watch what other authors in your genre are doing and how well it works for them.

Personally I am releasing books as I complete them. I don’t have the patience to keep them til the whole series is complete! I want to share them with the world! When I started this path I decided that I was in it for the long haul and I try to keep that in mind when I make decisions related to my author career. I don’t want to be a one series wonder, so I want to build towards sustainability rather than burnout. I want to pace myself and I feel that releasing as I go is the best way to do that.

I am building the foundations now, so I want those to be right, even if my immediate income is lower than it might be. As I build the number of books I have available I hope to build my readership and the amount of money that I make from my books. Which means that I am not so interested in making as much money as soon as I can. I have a plan for the next few years for the two series I am currently working on, and once I have published those I will reassess.